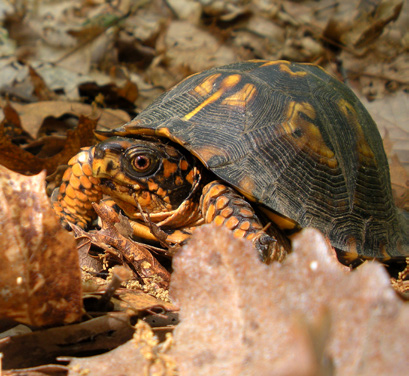 Our research is designed to evaluate the responses of box turtle home range and habitat use to even- and uneven-aged timber harvesting. Beginning in May 2007, we located box turtles in 6 research core areas (2 control, 2 uneven-age, 2 even-age) and subsequently tracked individuals 2-3 times per week through October 2007. Vegetation characteristics collected at a subset of turtle locations will be used to assess box turtle habitat use and selection.

Relatively high population densities of box turtles are required for successful reproduction. In 2007, we established two, 20-acre search plots within the each core area. Plots were searched for turtles 6 times to estimate local population densities within each plot. All data collected in 2007 and part of 2008 will serve as the baseline to compare to post-harvest responses. 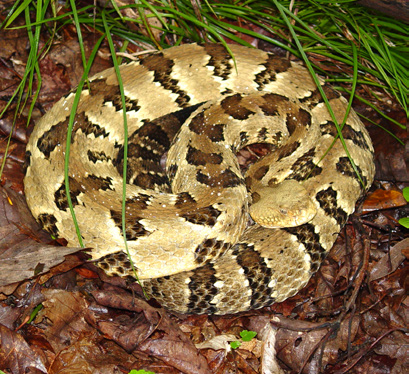 Beginning in May of 2007, surveys for timber rattlesnakes were preformed within core units where previous observations occurred. Nineteen snakes were observed as part of these surveys. A subset of captured rattlesnakes (6M:5F) were implanted with a radio transmitter and tracked 3 times a week throughout their active season. Radioed snakes are currently located on control and even-aged management units. All snakes were tracked to their respective hibernacula. The habitat selected by study individuals was quantified and will be compared to paired random habitat measurements. Data collected from 2007 will be used for comparison against post harvest snake radiolocations and habitat selection.

Arachnids are an important, yet understudied component of most forest communities. They serve as important predators of many invertebrate taxa and are components of avian and mammalian diets. Despite these key roles, the efforts of forest management on woodland spiders is largely unknown. Dr. Marc Milne aims to help fill that knowledge gap using the HEE study as his laboratory.Starting in 2015 through the next 10 years, Marc will 1) determine the diversity and abundance of spiders within southern Indiana hardwood forests; 2) determine how land use and timber harvesting regimes affect that diversity and abundance; and 3) determine how timber harvesting and prescribed fire interact to either promote or reduce arachnid communities. Sampling for spiders will occur year-round. There are a variety of methods that will be used. Handsampling is used to look through the leaflitter, on vegetation, and on the ground. Sweep netting uses a sweep net to collect spiders from low vegetation, while shrub beating using a beating sheet and stick to knock spiders off of higher vegetation. Pitfall trapping will be used as well; this involves digging a small hole (< 15 cm deep) and placing small cups (~250ml) into the ground. These cups are filled with either propylene glycol, a non-toxic antifreeze, or with soapy water. These traps are collected weekly. Finally, Berlese funnel traps will be used with field-collected leaf litter. In Marc’s lab, the litter is placed in a large funnel atop a flask of preservative; spiders tend to flee deeper into the litter, eventually falling into the preservative. 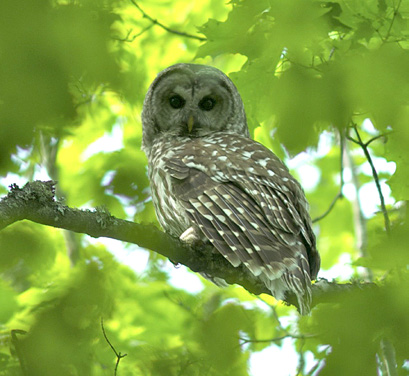 An exciting project was initiated during the winter of 2009-2010 that will continue for the next few years. In order to get a better study on how different parts of the overall forest community interact in response to timber management, we were interested in examining owl populations in and around the HEE study region. To implement this project, we have engaged the local birding community, making this a good example of “citizen science.”

Owls are top predators in the regional food webs, feeding on species groups that are already under study in the HEE project, namely small mammals (the prey of Great Horned Owls and Barred Owls) and forest insects (Eastern Screech-Owls). All three of these species are permanent residents (e.g., they are non-migratory). In addition to different prey, the three species have different territory sizes. Thus we were interested in conducting focused studies on population sizes and territory placement in the region surrounding the HEE study areas. Surveys are conducted in each of the nine HEE research areas, elsewhere throughout Morgan-Monroe and Yellowwood State Forests, in Brown County State Park, and in parts of the Hoosier National Forest including the Deam Wilderness area.

Due to the wide-ranging area we wanted to survey, we recruited volunteer birders from the region to conduct surveys of forest night birds (primarily owls, but also Eastern Whip-poor-wills and the related Chuck-Will’s-Widows in the summer). Surveys are done in mid-winter because most of the owls breed from January – March and are most responsive to recordings of their calls at this time. The surveys targeting Barred Owls are repeated in May-July to attempt to detect family groups and therefore get an impression of reproductive success.

Initial analyses have shown that Barred Owls and Eastern Screech-Owls were not affected strongly by the timber harvests in the state forests. Barred Owls were almost absent from Brown County State Park, but the screech-owls were common there (perhaps because Barred Owls are known to be screech-owl predators). We expect to continue the winter and summer surveys for at least two more years. If funding becomes available, we would also like to conduct a radio-telemetry study to examine how the owls use harvest and edge areas for foraging habitat. If you are interested in volunteering with this project, please contact the HEE Project Coordinator.

When examining oak regeneration in Indiana, one must not underestimate the power of the white-tailed deer. Although the deer in the study forests do not appear to be having as much of a devastating impact as they did in nearby Brown County State Park in the 1980s and 1990s, excluding deer from regeneration sites may have a positive impact on growing oak seedlings.

Thirty-two deer exclosures were erected in and around many of the harvest areas during 2009. These exclosures are 72 ft by 72 ft and 8 ft tall. The exclosure placement is relative to the edge of the harvest opening. In four 3-acre group selections, an exclosure is placed near the center of the opening, one is along the edge, and one is outside the 3-acre opening in the single-tree harvested matrix. In four of the six 10-acre clearcuts, a center, edge, and matrix exclosure is supplemented by an additional exclosure within the opening between the center exclosure and the edge. The four 10-acre shelterwood areas will only have a single center exclosure until the second shelterwood entry removes some of the overstory trees.

Each fenced exclosure has an unfenced reference plot associated with it to compare vegetation response to deer browsing. Researchers will be looking at the effects of deer (and other herbivores like rabbits) on hardwood growth and survival and how these effects vary among the different harvest types (clearcut, shelterwood, group selection) and in relation to the distance from the harvest boundary.